More than 2000 years ago Chinese medical theorists mapped something in great detail. Remarkably, this map of the meridians, the world’s oldest medical map, is still in worldwide clinical use. Billions of people on this planet have access to treatment predicated on meridians.

The ancient Chinese maintain they mapped the flow of ‘blood and qi’ as it coursed around the body. However bioscience has been unable to discover the conduits called meridians. We now understand the heart and blood circulation to an anatomical and physiological depth that was previously unthinkable, it is clear that meridians do not map blood flow. Qi may be summarized as energy manifesting itself but the concept is amorphous and the conduits it is supposed to flow in have not been found – not for lack of trying. Many techniques in the armamentarium of modern medicine have been directed towards finding the enigmatic meridians that the Chinese so confidently mapped 2000+ years ago. Both the Contractile Field model and the study of archetypal postures shed new light on the meridial map. The decoding I propose answers many of the most pressing questions asked of the traditional acupuncture profession such as:

My book Muscles and Meridians decodes this ancient venerable map via methodologies appropriate to the culture from which it emerged. 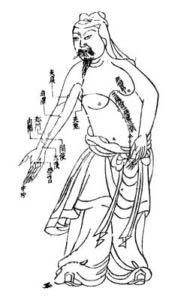