Muscles and Meridians
The Manipulation of Shape

Clarity is slowly emerging, from various disciplines, regarding the complexly integrated way the body functions. Recent research by scientists such as Ingber (2006), Langevin (2001) and Schleip et al (2005), as well as clinicians and anatomists such as Hedley (2007), Stecco (2007) and Myers (2009), has helped to reveal more clearly – for example – the important role of fascial structures in offering shape, coherence, stability, mobility and communication potential, to the body’s economy.

Another part of that understanding involves a greater appreciation of the importance of tensegrity in the architecture of everything, from the cell to gross human musculo-ligamento-skeletal structures – and how they move and function. Equally this growing understanding of the interconnectedness of everything helps to clarify why restriction, dysfunction and tissue modification (resulting from pathology, overuse, misuse, abuse or disuse) in one part of the body, can produce major repercussions at a distance.

As two recent Fascia Research congresses have made clear (Boston 2007, Amsterdam 2009), much remains to be revealed as these concepts are studied, both by research scientists and clinicians. By looking backwards in time into the very origins of life, as well as by close observation of his patients, and via a series of remarkable insights, Phillip Beach has performed the heroic task of moving our understanding further.

By surveying, investigating and charting the human condition relative to shape, posture, and movement (he describes movement as ‘the coherent changing of shape’)– in the contexts of evolution (how did early life forms move?), embryology (the extraordinary processes of cleavage, folding, compaction and more, of the embryonic disc, to the point where limb buds, arches and the beginnings of sense organs appear), childhood development, physiology and neural function, and what he terms ‘archetypal postures’ – Phillip Beach has advanced our understanding – and has offered a new way of understanding the way the human body works – or fails to work when unbalanced and out of synchronisation (‘out of tune’) with its optimal patterns.

Beach’s training in osteopathic medicine, his exploration of dance, martial arts, movement therapies (such as Pilates and yoga), and his newfound understanding of Traditional Chinese Medicine’s (TCM) meridian map, has informed his investigations and findings – for example of movement patterns that he terms ‘contractile fields‘, which are structurally and functionally connected to sense organs. In building the arguments for the validity of his findings he notes a neurological hierarchy, in which the organs of sense, taste, sight, smell, etc. offer the cues that drive much basic, primitive, movement. He also focuses attention on the adaptative processes involved in our anti-gravity evolutionary struggle to rise from the floor – where sitting, squatting, crawling and wriggling are more appropriate – to the upright where standing and walking become possible.

The way in which his enlightened insights moves from the likelihood that evolutionary and developmental patterns of movement may be strongly associated with organs of sense, to the idea that these very movements, or the contractile elements associated with them, determine the shape and connections that are described as TCMs acupuncture meridians, is both thought provoking and therapeutically exciting.

One way of viewing much musculoskeletal pain and dysfunction is as failed adaptation. What Beach has done is to paint a very big canvas indeed, where adaptation takes on a wider meaning than is commonly conceived – and where potential clinical solutions lie in a greater understanding of these themes emerging from a background of evolution, embryology and patterns of contractility, that may be assessed and modified via appropriate therapeutic interventions.

Among the common-sense approaches suggested by this detailed exploration of the body are some extremely simple and clinically practical suggestions:

Beach acknowledges that: “Because of the exploratory nature of the book, aspects of the work will prove to be too speculative, for which I take responsibility.” However this should not detract from the potential clinical value of the broad ideas that emerge in this book. I for one have learned a great deal from the ideas explored and synthesised – and believe that the book will take its place as the cornerstone of a branch of manual therapy that detaches itself from modalities, and historical professional allegiances, offering as it does both explanations and new therapeutic directions. 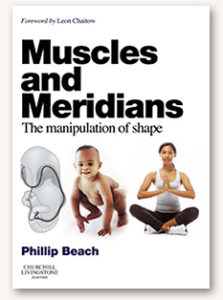 ‘The biomechanical and postural concepts emerging from Phillip Beach’s study of contractility and vertebrate movement patterns are revolutionary and clinically relevant to all manual therapists and acupuncturists. They change the way we need to view the body and its behaviour’.